Skip to content
Previous Next
How You Can Kill a Sales Pitch: Tales from the Gym

How to Kill a Sales Pitch: Tales from the Gym

“Tell me what your goals are,” the very ripped, very tattooed gym rat said to me. I had spent the better part of my workout trying to avoid this guy and now I was cornered. 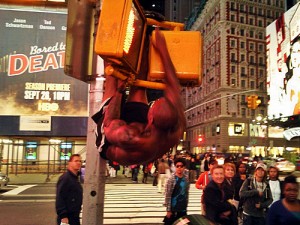 When you workout in LA, you see a much more interesting cross-section of the population at the gym. There are the Arnold-worshipers who clearly love their steroids as much as Popeye loves his spinach. There are the Stairmaster mistresses who wear next to nothing and have come up with over 100 ways to climb a set of stairs (forward, backward, sideways, step and back kick, step and calf raise, skip a step, etc.). Then there’s the rapper and singer wannabes who randomly start singing out loud hoping to start a Glee musical montage. And, of course, your average Joe who just wants to get their workout in – like me.

Every once in awhile, the spectacle at an LA gym is worth watching. It is pretty cool when a group of performers working at the Cirque du Solei show get their fitness on with a few cool balancing acts and flips. The MMA guys practicing their drills is a site to be seen. And, then, unfortunately you also have the guys who don’t know what they’re doing, peacocking with stupid stunts.

I call him that because he later explained to me how he transforms people into machines, or something along those lines.

Mr. Robot and his sidekick were trying to draw attention by doing squats standing on a Bosu ball, pseudo-acrobatics on the TRX frame, all the while making loud effortful grunts; just in case you couldn’t see them, they were determined that you could hear them. Mr. Robot would do the more impressive moves while Sidekick would film it on his iPhone.

While all this was going on, I was determined not to look in their direction. I was working on my pull-ups on the TRX frame while they were putting on their show to the left of me.

Once I finished there, I got my kettlebells in place for my end-of-workout interval swings.

That’s when they trapped me.

Sidekick complimented me and my pull-up skills. More than happy to take the quick compliment, I made the mistake of taking out one of my earbuds to say thanks. That’s when Mr. Robot went in for the kill.

“Tell me what your goals are,” he said, “Why are you doing those pull-ups?”

Trying to keep my response curt, I said, “Because I want to get stronger.” Apparently, he was unsatisfied with my response.

“But what’s your goal. You’re doing those for a reason. You’re trying to achieve something.”

I thought that getting stronger was the goal, but I replied, “I’m like everyone else in here; I just want to look good naked.”

Sidekick was clearly the smarter of the two because he picked up on my very clear please-don’t-talk-to-me body language and tone and quietly left the conversation to go workout on another machine.

Mr. Robot, on the other hand, had turned on his sales pitch program and wasn’t going to give up. 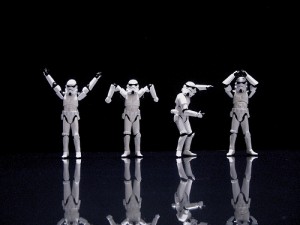 Closest thing to robots that made me smile. by JD Hancock

Paralyzed by politeness, I listened.

“I’ve been a trainer my whole life. I train fitness models and people like you who want a complete transformation.” I wasn’t sure if I should have been insulted or not.

“Every single person I have ever trained has changed. You can see it all on my website. Your training is all wrong. I know what you want to look like and I can get you there.” Then, he began to spout out completely wrong fitness philosophy which I won’t bore you with here.

“You see, people don’t understand that change happens in every moment. Once someone decides to change, their body will transform instantly.” I kid you not; he actually said that.

“I’m Mr. Robot and I turn people into machines. You saw all the things we were doing here. You could do that, too.” I had no desire to take part of his training because it all looked like an injury ticking time bomb.

“That’s why you should do a free session with me. I will show you how to get the results you want and show you what you’ve been doing wrong. It all happens in the gym. People over complicate nutrition and it really has no bearing on the results in the gym.”

Aaaaaaand, that’s when he really lost me.

I wasn’t in the mood to turn this into a point-counterpoint discussion; I just wanted to get back to my workout. Finally, he finished his pitch and caught up to Sidekick.

His loss is your gain.

Let’s just pretend that Mr. Robot was a really good trainer. Even if that were the case, trying to give his pitch in the middle of someone’s workout is probably not the best idea. You have to find your window of opportunity. Solid sales takes patience and strategy. He had a huge barrier to overcome from the get go; I was focused on getting back to my routine. If he had waited until I was stretching at the end, I might have been more open to chit chat.

If he was more Bond-esque about it, he would have scouted the gym floor and looked for his target profile. Meaning, he could specialize in helping overweight people get in shape, or working with in-shape people lose the last 5 to 10 pounds, or maybe he’s great with older women, or maybe he jives well with younger guys. Whatever the case may be, if he had a target profile, then he would know who to approach, when to approach and what to pitch. His description of his work was so scattered it was hard to follow. If he knew his target profile, he would have specific examples, stories, and tips in the bag that would apply to the people he approached. That way, he wouldn’t have to come up with new material with every time.

Talking Down to the Prospect. Really?

Telling your prospect that everything they are doing is wrong – or any variation of that – kills any rapport you might be trying to create.

For some reason I find that the “my way is really the only way” pitch is very common in the training community. I don’t know why trainers feel that in order to convince someone to train with them, they have to put down all other trainers.

You can still present a new solution without degrading someone’s previous attempts.

And the I’s Don’t Have It

Not sure if you noticed it or not, but Mr. Robot talked about himself more than anything else. I this. I that. I do this. I do that. I, I, I, I, I. There was no room for me in the conversation. That’s sales death.

I hope Mr. Robot’s sales misstep helps you in your next sales situation or helps you see what makes some sales people more successful than others.

What are your thoughts on Mr. Robot’s techniques? Was this helpful? Any other “fails” you noticed from Mr. Robot? Let me know in the comments section below!